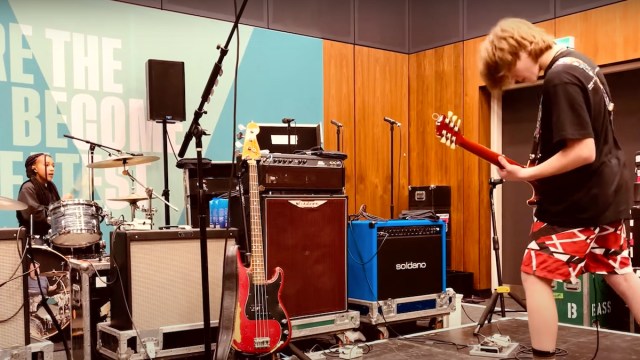 It’s been nearly six weeks since Wembley Stadium hosted London’s iteration of the Taylor Hawkins Tribute Gala, but we haven’t forgotten the star-studded event — and neither has Nandi Bushell. The young drummer took to Twitter on Wednesday to give a heartfelt shout out to another young musical prodigy: 16-year-old son Hawkins.

Bushell spread the love with a minute-long video consisting of clips of the duo swinging together before the tribute show: “Jumbling with Shane backstage at Wembley is one of my favorite moments ever,” she wrote in the caption. “Shane is one of the nicest, kindest, most talented people I’ve ever met. He’s so much fun to be around and has so much energy.”

The pair rehearses a few songs in the video, including Foo Fighters classic Everlong and Nirvana’s Smells Like Teen Spirit — both songs, by the way, feature Dave Grohl’s percussion on their respective studio versions. Although the drums seem to be the kids’ favorite instrument, Bushell also boasts of licking them while Hawkins shreds the guitar.

Not that we need any more confirmation, but Shane sure makes his dad proud. See bushel’s function below.

This is just the latest in a series of seemingly endless jam sessions: earlier this week, she posted a clip of Rage Against the Machine’s “Killing in the Name” alongside her little brother, whom she says she teaches about “all of rock’s greatest bands.” and metal.” And earlier this month, she also shared an impressive cover of Eminem’s popular fast track “Rap God.”

Jamming with Shane backstage at Wembley is one of my all-time favorite moments. Shane is one of the nicest, kindest, most talented people I’ve ever met. He is so fun to be around and has so much energy. pic.twitter.com/Fo7u1v3T9I