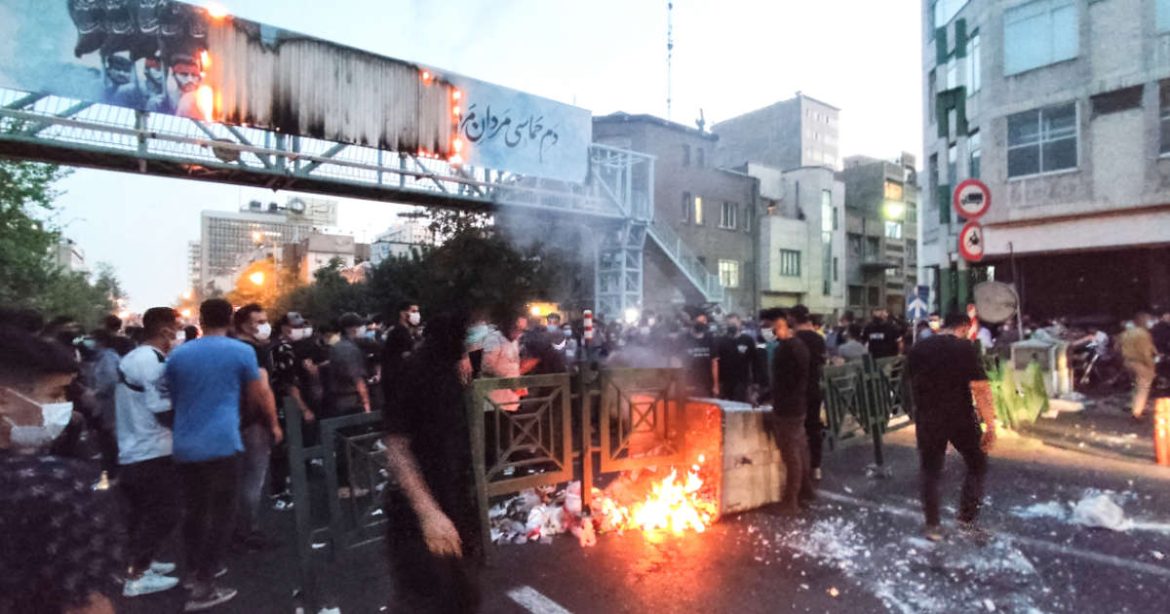 Ayatollah Khomeini likened people to a minor child who must be guided by a jurist. In his book “For an Islamic Government” (published in 1964 in Iraq and translated into French by Fayol in 1979), he announced the program of the Islamic Republic before its creation in 1979. A Shiite theocracy that borrows from the Republic only the name, associated with some pseudo-democratic institutions.

For the first time in history, the foundations of Islamic government will be codified, and Sharia (laws established by clerics in power) will be introduced into the lives of men as a system of government. […] »after nearly a decade, future President Hashemi Rafsanjani (speech before the Islamic Council on June 3, 1987).

Apartheid, patriarchy, gender inequality, ethnic groups, and religious minorities form the foundations of the codified Sharia law imposed on Iranians. For the Islamic legislator, separation begins in the womb from the use of the terms “completed” And the ” Human “ Refers exclusively to a male fetus when it comes to blood money (blood money) paid after the abortion. Likewise, with legalized polygamy, a man could contract marriages with multiple women, including girls as young as 13 years old. A father could kill his child by paying for his own blood and without risking the death penalty, unlike the mother who would suffer the ultimate punishment.

The ayatollah regime does not have any republic worthy of the name. Is it Islamic then? Let’s read Khomeini’s decree: “In the interest of the Islamic Republic and the rule of the jurists, the infringement of the word of the Qur’an becomes legal under certain circumstances.”

The lesson learned by his successor, Ali Khamenei, is to amend the constitution so that the era of jurisprudence (wilayat al-faqih) becomes the absolute rule of jurisprudence (wilayat mutlaq al-faqih). “For the sake of the general interest of Islam and Muslims, the decisions of the Supreme Leader take precedence over the popular will and representative bodies and they must take precedence. » (Paragraph 75 of Article 5 of the Constitution).

Thus, for 33 years, Ali Khamenei imposed his omnipotence on successive puppet governments. The pragmatic President Rafsanjani opens the doors of major companies to the Revolutionary Guards. Khamenei, the commander-in-chief of the armies, places his most loyal generals at the head of the Khatam al-Anbiya military base, which has become the seat of the country’s most powerful industrial and financial trust.

Ali Khamenei also has financial aid for institutions — the martyrs and the disenfranchised, to name a few — and houses of worship. Its cash, stock market, pension, and revenue values ​​are estimated at several billion dollars. The clandestine operation of these sprawling pharmacies and the mafia’s practices of abuse of power, embezzlement and money laundering are regularly denounced by the press. Ayatollah Azma (the highest rank in the hierarchy of Shiite clerics) demands that officials be dismissed from houses of worship that are supposed to help the poor. Khamenei ignores them. He protects his followers, including the Rishari, in charge of the institutions. A former judge and prosecutor, he sent the latter to the gallows from among the “counter-revolutionary and corrupt” influential men – high-ranking businessmen, soldiers or religious people – whom Khamenei considered dangerous.

The presidential campaign of 1997 arrives. Women and youth carry Mohammad Khatami to power despite the muscular raids of the Bassidji militia. But the hope promised by this monk, who smiles at the women while looking them straight in the eyes, quickly turns into a nightmare.

At the beginning of 1998, a wave of brutal and unimaginable assassinations targeted politicians, intellectuals and artists, dismembering some with knives in their beds, and beheading and slaughtering others in the streets. In “The Dungeon of Ghosts”, journalist Akbar Ganji, a close friend of Khatami, reveals the underside of murders ordered in high places and carried out by intelligence agents. The bestseller was banned, and the writer was imprisoned. The ensuing demonstrations are severely suppressed. Withdrawals of foreign students on campus, disappearances, arrests, and death sentences followed by a total blackout.

Protests in Iran: If you kill two, thirty will replace them

Khatami was re-elected in 2001, and was greeted by all European heads of state. Talking about the dialogue of civilizations and obtained a Ph.D honorary Abroad, while Khamenei oversees Iran’s nuclear program and cleans up the intelligence services to bring them under the control of the Revolutionary Guards.

First recreation with moderate reformists, Mahmoud Ahmadinejad, an eccentric populist backed by Ali Khamenei, was elected president in 2005. The president’s messianic program boils down to the country’s frenzied Islamization and ideological war against the West and it “weeds” And the destruction of Israel! Despite the disastrous outcome of his term, Ahmadinejad ran again in 2009 against Mir Hossein Mousavi, Khamenei’s former prime minister who managed the war economy better during the eight years of conflict with Iraq than the outgoing president did in peacetime. With a turnout of 85% – the first in Iran – Mousavi was declared the winner in all polls in the first round. But it was Ahmadinejad who emerged from the turban of the magician Khamenei, with 62.6% of the vote. The challenges of the political class, including the powerful Hashemi Rafsanjani, do not move the inflexible Ali Khamenei, who confirms the validity of the result.

We know the rest. Spontaneous demonstrations that gather millions of people across the country are being bloodily suppressed. Blocking communications (cell phones and internet sites), Ahmadinejad’s thugs, Murshid’s creature, assassinating students and demonstrators. Neda Agha Sultan falls from a sniper’s bullet in the middle of the street and dies under her father’s eyes. The murder of the girl filmed in real time spreads all over the world. The system yells loudly against “external enemies” from the state.

But when the scandal broke out in the Kahrizak prison, where Mohsen Ruhlamini, the son of Abd al-Hussein Ruhalami, a staunch supporter of Khamenei, died under torture, and Hassan Yunus, the son of the former interior minister, was also raped, like the other. Detainees guide comes out of his silence. regret “Violations committed in Kahrizak”He orders the center to be closed. Two followers of the Center and four Basijid, who are responsible for the massacre that took place on the campus of Tehran University, will be sentenced to death. Of the 98 plaintiffs, the victims of Kahrizak, 47 of them challenged the death penalty for their children’s executioners and demanded that the decision-makers and senior officials be brought to justice. The parents of some of the hanged Basijis are among the plaintiffs. To date, no action has been taken on these complaints.

Azadeh Kian on Iran: “For 43 years, we have witnessed the events of a declared uprising”

Hassan Rouhani, who was elected in 2013, calls for a redistribution of power within the circle of believers. Iranians still hope that pluralism, be it Islamic, will break little by little the monopoly of power exercised by the dominant reactionary parties and will favor, in the medium term, a peaceful development from within. The reformists who drive popular ambition are betting on their side on the nuclear agreements and economic growth to improve the living conditions of Iranians. In the endThe guide finds renewed legitimacy and calms down.

The unilateral US withdrawal from the nuclear agreements will overturn all these plans. In the face of Donald Trump’s tightening sanctions on Iran, economically suffocated Iranians curse and despair at the system’s structural neglect and the endemic corruption of successive governments. They are rebelling against Ali Khamenei who is squandering their money to support his comrades from Hezbollah or Islamic Jihad. The response to the legitimate and sporadic demands of 2018 and 2019 is the same: bullets, blood, victims, and prison.

The division between the power and the people, which was proclaimed in the memory book of the late Ayatollah Montazeri (Dauphin Khomeini, before the latter expelled him in 1988) with the title “I am ashamed,” becomes irreversible. His “J’accuse” addressed to “People in power who allow themselves to commit all possible and unimaginable crimes […] Intimidate and kill intellectuals and intellectuals, believing that they will be punished. No religion or ideology allows this. I’m ashamed, I apologize to people […] But the downfall of tyrants is certain.”

The “appointment” of Ibrahim al-Rai as president imposed by Ali Khamenei seems at once the beginning of the end. Yesterday Nada, today Mahsa, are synonymous with Iranian youth rebellion. Intelligent, educated, daring, citizen, pacifist, with bare hands but alert mind, Afyon rejects amnesia as the dysphoria of fear. She turns trauma into battle fuel for intelligence, culture and beauty in her image. It rejects blind violence and demands the rule of law and the sweetness of life. Iran, youth, freedom. Gordafarid vs. Kaveh (Heroes and Symbols of Liberation from Persian Epic Literature). Rotten, backward old men, barricaded in the Tower of Babel, stand facing the wall.

If Iran’s hope is its youth, it will know how “to reorganize its future without a god or king, through the systematic worship of humanity.” It remains to remind the free world, intellectuals, writers, artists, scholars, academics and millions of young French people not to forget them. The children of my nation who disappear, who are beaten and imprisoned, who are killed with impunity, have beautiful names and faces and a beautiful appearance of what could be the wonderful future of this thousand-year-old country which has contributed so much to the civilization of the world. The Mohsen Hachtrudi Association is keen to echo the cry of alarm from Iranian students. It’s the SOS MoHa broadcasts week after week.