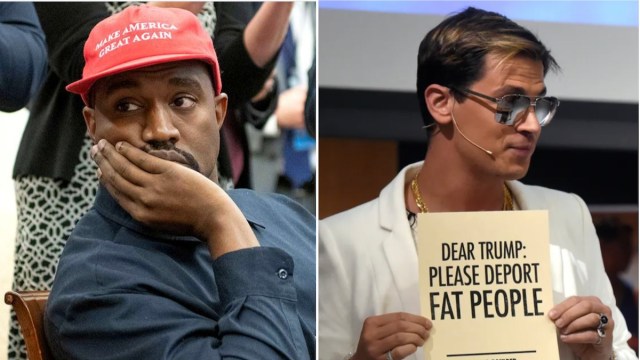 Kanye West appears to have slept with far-right agitator Milo Yiannopoulos before running for president in 2024.

Over the weekend, West introduced Yiannopoulos to the paparazzi as someone “working on the campaign.” When asked if he was indeed running for president, West replied, “Yeah…it’s simple….we’re just heading into the future.”

Although West has increasingly aligned himself with right-wing political figures in recent times, his association with Yiannopoulos is particularly troubling. The former Breitbart writer is known for his hateful slogans about Islam, feminism, and the LGBTQ+ community, as well as his association with several neo-Nazi and anti-Semitic figures. He famously got fired from Brietbart and lost a book deal after a video circulated in which he appeared to condone pedophilia. He has also been banned from Twitter for harassing female users, and banned from entering New Zealand due to comments he made in the aftermath of the 2019 Christchurch mosque massacre.

Yiannopoulos most recently served as an intern for Republican Congresswoman Marjorie Taylor Greene, but now appears to be part of West’s 2024 presidential campaign.

West previously ran for America’s top political office in 2020, but his campaign is most remembered for a bizarre rally at which he donned a bulletproof vest and stopped crying. Of the 12 states in which his name appeared on the ballot, West received more than 60,000 votes (including one from Tucker Carlson).

In the past month, after a series of anti-Semitic outbursts, West has lost more than $1 billion in branding deals and has seen his radio airplay and airplay numbers plummet. However, like his good mate Donald Trump, West seems delusional that hundreds of millions of Americans are willing to cast ballots for him in 2024.

Kanye West says he will run for president in 2024 and Milo Yiannopoulos, intern Marjorie Taylor Greene, is working on the campaign. pic.twitter.com/nLm8uuSl61