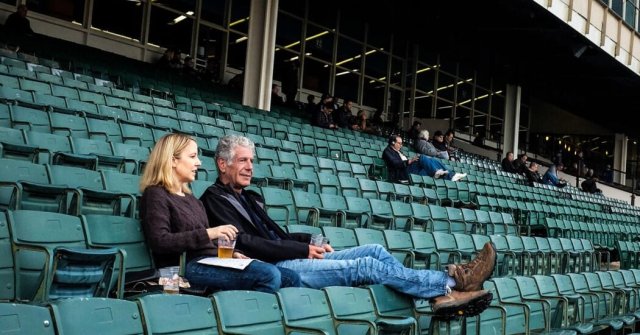 Over the course of the book, Ms. Woolever never makes the claim that the guide is comprehensive—and the end result does feel incomplete and unbalanced. The countries of Ghana, Ireland and Lebanon get three pages apiece; the United States gets nearly 100. There is a chapter on Macau, but nothing on Indonesia or Thailand. These are somewhat predictable shortcomings, dependent as the book is on voice-over transcripts spanning decades and the impossible task of stringing them together across time.

Some of the inclusions feel at odds with Mr. Bourdain’s avoid-the-tourists approach to travel, as well. In the Tokyo section, recommendations include the Park Hyatt hotel (made famous by “Lost in Translation,”); Sukiyabashi Jiro, the restaurant at the center of the documentary “Jiro Dreams of Sushi”; the bizarre kitsch-fest that is the Robot Restaurant; and a bar in the tourist-clogged Golden Gai neighborhood. These may be all appealing attractions to a first-timer in Tokyo, but there is nothing in that selection that you wouldn’t find at the top of an algorithm-generated TripAdvisor list.

When I asked Ms. Woolever about these recommendations, she agreed they were perhaps obvious choices, but said Mr. Bourdain wanted to include them because of how much they meant to him, after so many visits to the city. “He wasn’t always (or, arguably, ever) about cool for cool’s sake, or obscurity as its own reward,” she said in an email.

If it’s a guide they are after though, travelers may be left wanting. In Cambodia, you get recommendations for three hotels, two markets for dining and a suggestion to check out the temples of Angkor Wat, the country’s most famous attraction by a long shot. It isn’t exactly the list of hole-in-the-wall spots with no addresses that fans of Mr. Bourdain may be hoping for. What those fans will find though is Mr. Bourdain’s word-for-word rant against American military involvement in Cambodia (“Once you’ve been to Cambodia, you’ll never stop wanting to beat Henry Kissinger to death with your bare hands.” ) Having those passages—the no-holds-barred monologues that were a hallmark of his television shows—in one place might be the book’s greatest strength.

Over the decades that Mr. Bourdain spent traveling the world, there was a lot of talk of the “Bourdain Effect”: how a culinary gem, previously only frequented by those in the know, could be “ruined” by being included in his show . When I asked Ms. Woolever whether she thought this book could amplify that effect, she emphasized that most business owners knew what they were in for when approached by producers. “People call it the ‘Bourdain Effect,’ but Tony didn’t invent it,” she said. “It’s something that business owners have to weigh out for themselves.”

As I read the book, I was thinking of a different Bourdain Effect, one that feels more vital than ever right now, as travel begins to take its first baby steps back after a year of lockdowns. Seeing so much of Anthony Bourdain’s work in one place and being able to compare his country-by-country impressions in a tightly packed medium, makes it easier to see what he stood for. A traveling philosophy emerges: his utter disdain for stereotypes, his undying commitment to challenging his own preconceptions, his humility in the face of generosity.

Because of tragic circumstances following its inception, “World Travel” may feel more like an anthology of greatest hits than a new, original guidebook. But read cover to cover, country by country, it is an enduring embodiment of Anthony Bourdain’s love for the whole world and a reminder of how to stack our priorities the next time we’re able to follow in his footsteps.